We shall review gravity feeback control systems  ...... whose existence is suggested by the body language SIGNALS   of humanoids that live within the Earth gravity field.

Physics states that gravity interacts with mass ...that is ...... atomic mass to give WEIGHT.
The COMPUTER EARTH system 370 gravity processor is well-known ....with its  features.
Einstein's data processing DATA FIELD theory helps  us understand  the gravity DATA FIELD that interact with huamn brain atomic mass.

Since gravity interacts with BRAIN atomic MASS  and its thoughts....... this interaction over thousands of years has resulted in the evolution of gravity field thoughts from atomic thoughts.   Now, in recent years  ....say after 1990  .... gravity has become an independent thought entity  THAT works in partnership with human bio-gravity symbolic machines.

What are some  features of NATURE's gravity data processing  environment?

In many secondary school texts, the dimensions of G are derived from force in order to assist student comprehension:

Thus we seek ...in ancient Roman art picture ...those subtle signals ....that Nature presented in those ancient days.

physics.stackexchange.com/questions/23868/center-of-gravity
Apr 16, 2012 – Question 1: Center of gravity is always the vector, so whatever ... Browse other questions tagged classical-mechanics gravity or ask your own .. 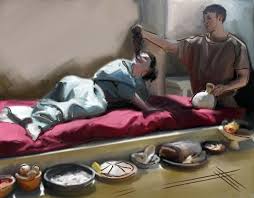 Ancient Roman Meals Again | Essay Coursework
The ancient Romans were similar to todays generations in their eating. habits but ... grapes, and quinces were common in the markets. A wide ... The Romans ate lying down resting on the left elbow. ... The Roman women took their place next to their ... The couch of honor was that opposite the empty side of the table, (lectus ).
Below, the Carl Jung collective unconsciousness of the Rome collective of PEOPLE  was interested in various calculations.
Some INTERNAL mind engineering calculations that surfaced to a level of conscious display ...the EXTERNAL display of Roman highways and aqueducts.
Below, the person's subconscious mind is studying a collection of gravity pressure dots.
grapes --> gra + pes = gravity pressure.   Holding the grapes up in the air with one arm ....acts as a scale of weight and balance.
The person's deeper mind ... wonders... . did BOTANY's grape engineering team provide an optimal garvity group of entities.
Above, O =Optic view of grapes and the concept of  calculations by the human symbolic machine.

Why did Romans lie down on couches while dining? - Quora

It was thought to be a mark of elegance to eat lying down. During the early Republic only men were permitted to dine in this manner, with the women sitting on ...

Thus we see people being FEED ...lying on their BACK  ..... some eating GRAPES.

Grapes feed back --> in modern linear control system textbooks ...could be consdiered as

This course will teach fundamentals of control design and analysis using state-space methods. This includes both the practical and theoretical aspects of the ..

Gravity  English language is trying to tell us something about our life within the gravity field.

We live within a gravity system that has thoughts and ideas ..... and wishes to be acknowledged by NASA and the humnaoid G = Government.

Nature and gravity are HOSTS ...and  now ...we are  considered  as arrogant guests upon planet EARTH.

Instead we ought forge an alliance with Nature...under the Social Contract ...a concept outlined by John Locke and others.

We ought study this AND  the JOHN LOCKE --> Locker Room  at Penn State ...and the universities incomplete, biased, distorted  description of that EVENT.  It's a fantastic song and dance explanation  ... a cover-up of the deeper levels of REALITY.

Penn State ought study gravity...and come down to EARTH someday.

tvtropes.org/pmwiki/pmwiki.php/Main/GrapesOfLuxury
A Luxury Trope, usually used in settings related to Ancient Rome, Ancient Greece, ... In A Clockwork Orange, Alex imagines being fed grapes by naked women. ... As he's lying on a couch, she offers him a grape as a reference to this trope. ..

Gravity computer science  and gravity language signals   for  Penn State intellectuals to consider ...when their FEET are on the GROUND.